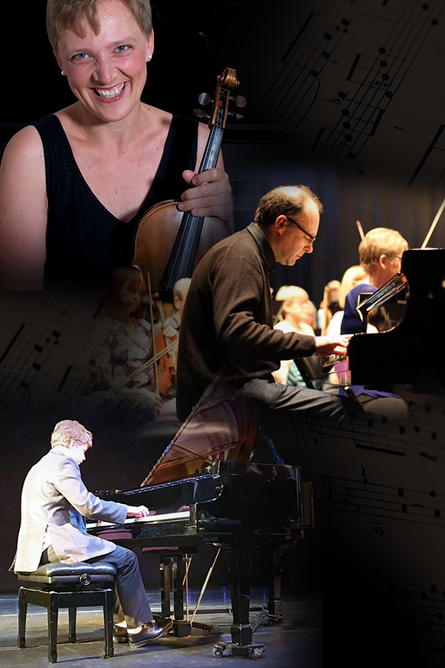 The German Violist Elisabeth Uhle-Wettler studied Music at Cambridge University, initially as an Instrumental Scholar at Girton College, and then subsequently as a postgraduate at King’s College, where she specialised in the music of the Italian composer and pianist Ferruccio Busoni. Since moving to Kent in the mid-1990s, Elisabeth has been deeply involved with music groups and musicians throughout the country, notably with the City of Rochester Symphony Orchestra and Chamber Ensemble, and with the composer and percussionist Jacob Bride’s innovative Bradstow Orchestra and Choir in Broadstairs.

Markus Sadler
Markus Sadler is 15 years old and studies the piano with David Sams and the trumpet with Tim Haywood; under their guidance he has passed Grade 8 in both instruments with high Distinction marks. Markus won major prizes at the Kent International Piano Course in 2018 and 2019, and has performed in masterclasses with renowned concert pianists Noriko Ogawa, Seta Tanyel and Peter Donohoe. As a trumpeter, Markus has been selected to play in the Kent Youth Orchestra, as well as performing in the Lydian Orchestra in Sevenoaks and the Maidstone Wind Symphony.

Jérôme Sadler was born in Orléans, France, and began his musical education at the Kent Music School with David Sams after moving to the UK at the age of 10. He studied Music at Cambridge University, where he met his future wife, Violist Elisabeth Uhle-Wettler. Jérôme’s postgraduate studies continued at the Royal College of Music in London under Professors John Barstow and Gordon Fergus-Thompson. He was a Junior Fellow at the RCM, and was awarded the college’s highest award for pianists, the Chappell Gold Medal. Since leaving the RCM, Jerome has divided his time between teaching, examining, and performing as a concert pianist, mostly in the UK and mainland Europe. His recent concerts include performances with the Dartford Symphony Orchestra (Beethoven 3rd Piano Concerto) and Saffron Walden Symphony Orchestra (Gershwin Rhapsody in Blue), and chamber concerts – often with Elisabeth and Markus – in the UK and Germany.

(Transcribed for Viola and Piano by Courtney Grant)