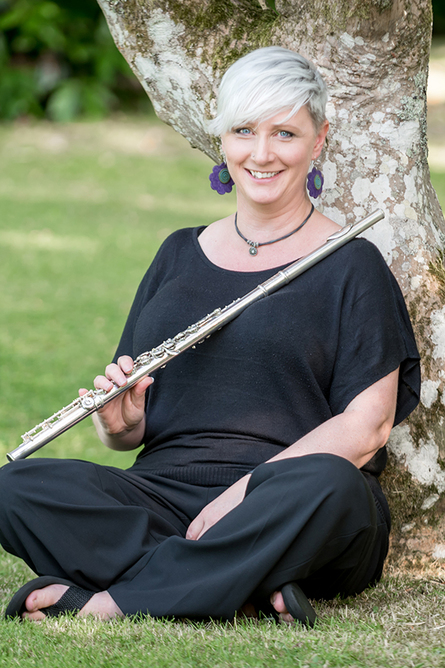 Nicky studied for her Masters Degree in Music Performance at the Royal Welsh College of Music and Drama studying with Jonathan Burgess of the Orchestra of the Welsh National Opera, and has had masterclasses with Anna Noakes and Wissam Boustany. She has been involved with the Ashover Festival, was a resident member of the Cardiff Camerata Orchestra for 2 years, was co-principal flute with Maidstone Wind Symphony for 4 years and is currently principal flute with the Bradstow Orchestra. With orchestras Nicky has performed Reinecke’s Flute Concerto, both Mozart’s Flute Concertos, Mozart’s Flute and Harp concerto and Vivaldi’s Piccolo Concerto. With Wind Orchestra, she has performed numerous pieces including Joel Puckett’s Shadow of Sirius and 1st Movement of Mike Mower’s Flute Concerto. She has recorded for R Smith and SPS sample CD, for composer Jacob Bride and the band Bellerophon. Nicky was a finalist in the 2009 Russell Shepherd Instrumentalists Competition in Cardiff and was awarded 2nd place in the Kent Competitive Festival’s 2002 Instrumental Soloist Competition. Nicky is also a member of Silberlicht Flute Trio, has been a member of the CODS Pit Orchestra for the past 5 years and is asked to dep with the Sandwich Concert Band, the City of Rochester Symphony Orchestra and the Canterbury Orchestra.

Jérôme Sadler was born in Orléans, France, and began his musical education at the Kent Music School with David Sams after moving to the UK at the age of 10. He studied Music at Cambridge University, and then moved on to the Royal College of Music in London, where was awarded a postgraduate performance diploma and MMus degree, and held the post of junior fellow. His teacher at the RCM was Professor John Barstow, and Jérôme also benefitted from the advice of Gordon Fergus-Thompson during these years. At the RCM, Jérôme won all of the main piano prizes, including the Chappell Gold Medal (the RCM’s top award for pianists). He performed with the RCM orchestras on many occasions, including performances of the Skryabin Piano Concerto, and the solo piano part in Messiaen’s Turangalîla-Symphonie. Since leaving the RCM Jérôme has divided his time between teaching, examining, and performing as a concert pianist, mostly in the UK and mainland Europe. His recent concerts include performances with the Dartford Symphony Orchestra (Beethoven 3rd Piano Concerto), Saffron Walden Symphony Orchestra (Gershwin Rhapsody in Blue), and the inaugural concert of the Bradstow Orchestra (Schostakovich 2nd Piano Concerto) in Broadstairs.