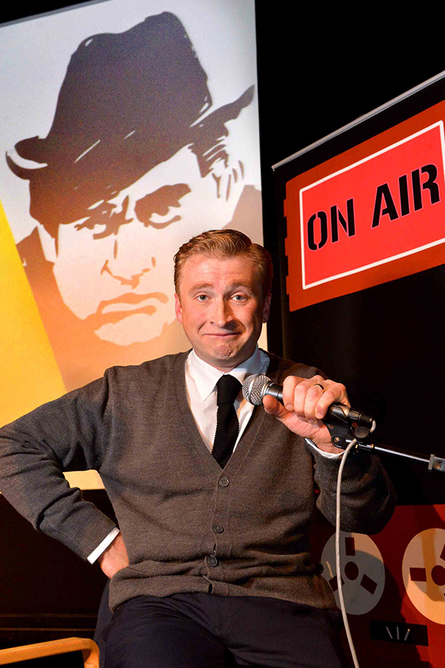 James Hurn is a multi-talented actor and impressionist (known for Dead Ringers and Blaired Vision) he will be performing a brand-new programme celebrating over 60 years of Hancock’s Half Hour including one Lost episode of Hancock’s Half Hour, and two episodes he has written himself in the same style as Ray Galton and Alan Simpson, with James voicing the entire cast. James is a master at recreating the accents and personas of such iconic 20th century British favourites as Tony Hancock, Sidney James, Hattie Jacques, Bill Kerr and Kenneth Williams.

The new show is performed in the style of a radio performance in front of a live audience, bringing to life the classic days of radio comedy.

James will be playing Tony Hancock in the Apollo theatre company’s tour of Hancock’s half hour starting at the end of January for 10 weeks and he has also played Tony Hancock for The Lost Hancocks Vacant Lot where they had a sell out success at the British Library in London, aswell as three other venues in Birmingham and Stourbridge.

The Loop/The Thick of It/The Veep scriptwriter Simon Blackwell has said 'I'm blown away by the Hancock and Sid impersonations. Just extraordinary.'

“Utterly masterful and quite, quite superb”Jon Culshaw - impressionist

“If anyone is out there wondering; does it work, one man doing the whole cast?  Are the new scripts up to scratch? Is it like the real thing? The answers are; yes, yes and yes. Go and see him while you can. James Hurn – as recommended by the Tony Hancock Appreciation Society” Tom Dommett -Editor -THAS 5*****